Scientists explore how the humble leaf could power the planet 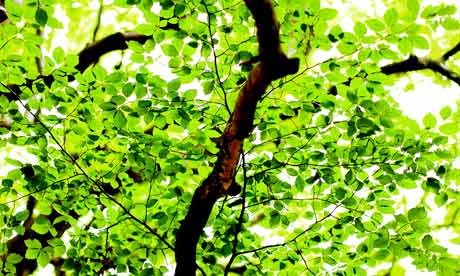 It is one of evolution’s crowning achievements – a mini green power station and organic factory combined and the source of almost all of the energy that fuels every living thing on the planet.

Now scientists developing the next generation of clean power sources are working out how to copy, and ultimately improve upon, the humble leaf. The intricate chemistry involved in photosynthesis, the process where plants use sunlight to convert water and carbon dioxide into sugar, is the most effective solar energy conversion process on Earth. And researchers believe that mimicking parts of it could be the ticket to a limitless supply of clean power.

The untapped potential for using the sun’s rays is huge. All human activity for a whole year could be powered by the energy contained in the sunlight hitting the Earth in just one hour. Harnessing even a small amount of this to make electricity or useful fuels could satisfy the world’s increasing need for energy, predicted to double by 2050, without further endangering the climate.

Most solar power systems use silicon wafers to generate electricity directly. But although costs are coming down, these are still too expensive in many cases when compared with fossil fuels such as coal, oil and gas. Scientists are keen to develop more efficient and cheaper alternatives sources of energy.

At Imperial College London, researchers have embarked on a £1m project to study, and eventually mimic, photosynthesis. Part of a project called the “artificial leaf”, involves working out exactly how leaves use sunlight to make useful molecules. The team then plans to build artificial systems that can do the same to generate clean fuels such as hydrogen and methanol. These would then be used in fuel cells to make electricity or directly to power super-clean vehicles.

Similar projects are gathering pace around the world: the US is poised to approve a federal research budget of around $35m a year for ideas that could create fuels from sunlight and the Dutch government has allocated €40m for similar research.

According to James Barber, a biologist at Imperial College London and leader of the artificial leaf project, if artificial photosynthesis systems could use around 10% of the sunlight falling on them, they would only need to cover 0.16% of the Earth’s surface to satisfy a global energy consumption rate of 20 terawatts, the amount it is predicted that the world will need in 2030. And unlike a biological leaf, the artificial equivalent could be placed in the arid desert areas of the world, where it would not compete for space agricultural land.

Ultimately, Barber hopes to improve on nature’s own solar cell. “If the leaf can do it, we can do it but even better,” he said. “[But] it doesn’t mean that you try to build exactly what the leaf has. Leonardo da Vinci tried to design flying machines with feathers that flapped up and down. But in the end we built 747s and Airbus 380s, completely different to a bird and, in fact, even better than a bird.”

Photosynthesis starts with a chemical reaction where sunlight is used to split water into hydrogen and oxygen. The oxygen is released into the atmosphere while the hydrogen is used to create sugars and other organic molecules for the plant. The aim of Barber’s artificial leaf project is to find an efficient way of mimicking that water-splitting reaction to create a clean and limitless source hydrogen. Unlike normal leaves, the new devices would not suck CO2 out of the atmosphere.

Hydrogen is a clean, energy-rich fuel that could be used in fuel cells to make electricity or else combined with carbon dioxide from the atmosphere (or from the exhaust of fossil-fuel power stations) to make methanol, a fuel that could be dropped into vehicles without the need for any engine modifications. “The challenge is to get hydrogen out of water using a ready supply of energy,” said Barber.

For domestic purposes, Dan Nocera, a chemist at the Massachusetts Institute of Technology, has calculated that using artificial leaf to split a few litres of water a day into hydrogen and oxygen would be enough to supply all a home’s energy needs.

Scientists can already produce hydrogen by splitting water but current techniques are expensive, use harsh chemicals and need carefully controlled environments in which to operate. The critical part of the artificial leaf project is developing catalysts made from cheap materials that can be used to split water in everyday conditions.

John Loughhead, executive director of the UK Energy Research Centre, described the artificial leaf idea as very promising because “we know that plants have already evolved to do it and we know that, fundamentally, it’s a workable process on a large scale.”

He added: “Ultimately, the only sustainable form of energy we’ve got is the sun. From a strategic viewpoint, you have to think this looks really interesting because we know we’re starting from a base of feasibility.”

Barber’s colleagues at Imperial, led by chemist James Durrant, have recently developed a catalyst from rust that carried out part of the water-splitting reaction. So far the process is not very efficient, so Durrant’s team is looking at improving this by engineering the surface of the rust. “We’re looking at adding small catalytic amounts of cobalt onto the surface of the iron oxide to make it more efficient.”

Nocera is also working on a catalyst made from cobalt and phosphorus that can split water at room temperature. Speaking last year, when he published his preliminary results in the journal Science, he said efficient water-splitting technology would be useful as a way of storing solar energy,which is a major problem for anyone who wants to use large amounts of solar power. During the day, an artificial leaf could use sunlight to split water and, at night, the stored hydrogen would be used to make electricity as it was needed. Chemical fuels such as hydrogen can store far more energy per unit mass than even the most advanced batteries.

Both Durrant’s and Nocera’s catalysts are many years from becoming commercial products.