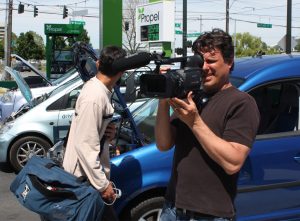 John Michael Parkan has been a filmmaker all his life. A production major at USC Film School, he worked at Paramount Pictures, the Motion Picture Corporation of America and The Ladd Company, before starting his own production company. An avid biker, John Michael Parkan has always been passionate about protecting the environment. As a filmmaker, he continues to look for stories that resonate and inspire audiences to affect change.

“More than a decade ago, I wondered why hydrogen and fuel cells were always ten to twenty years in the future. It’s taken time for the industry to mature, but the reality is, there is no better way to push humankind to the next century.”

Shelley Tabor has more than fifteen years experience in film distribution. She began her career in advertising before shifting to home entertainment, working at Sony Pictures and Paramount Home Entertainment and ESPN Films, managing the off-channel distribution & syndication of its award-winning 30 for 30 documentary film series. 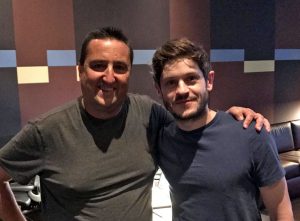 Stephen meet John at Paramount Studios, where their love of filmmaking would lead to working on the documentary. Concerned about the lack of knowledge of alternatives to fossil fuels, Stephen was eager to work with John to bring the knowledge and potential of this mostly ignored energy source, Hydrogen, to the public.

Stephen, worked on Staff at Paramount Studio for five years, before leaving to work on Star Trek: Voyager and Enterprise. He has continued to work on various projects over the years, including Eureka, Code Black for CBS and is currently producing on Quantico for ABC.

Stephen: “The American public, and the world really, needs to know the benefits and promise of Hydrogen. When I think of how many challenges there currently are with pollution and other issues with using fossil fuels; this documentary becomes so relevant to the solutions we are looking for to make a real change.” 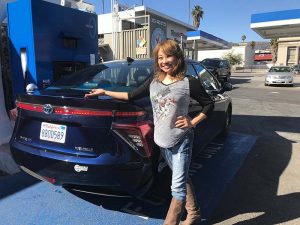 Tina Imahara with her Mirai at the Hollywood fuel cell station

A 20 year veteran film editor, Tina has edited over 60 short & feature films with an emphasis on documentaries. On Tip Toe, the compelling story of the Grammy Award winning South African Musical Group, Ladysmith Black Mambazo and their rise above apartheid, won a prestigious International Documentary Association (IDA) Award and was honored with Academy Award and Emmy Award Nominations.

Tina was the Lead Editor of Fuel, a documentary addressing America’s addiction to oil and the search for clean, sustainable energy. Fuel won The Audience Award for Best Documentary at the 2008 Sundance Film Festival where it received 11 standing ovations. FUEL was also Short Listed for the 2009 Academy Awards.

Another notable documentary Tina co-edited, was the NBC Prime Time Special, Harmony, in collaboration with HRH The Prince of Wales (Prince Charles) addressing climate change and innovative solutions to the global environmental crisis. Harmony was presented by Prince Charles and Robert Redford at the opening of the newly established Sundance London Film Festival.

Later Tina reunited with her Fuel team to co-edit The Big Fix, a documentary triggered by the BP Gulf Oil Spill. The Big Fix was honored as an Official Selection, and only U.S. documentary, at the 2011 Cannes Film Festival, where it received a 5 minute standing ovation to a sold out audience.

Most recently, Tina has completed At War With The Dinosaurs, a documentary on Hydrogen Fuel Cell Vehicles as a goal for a clean energy future, as well as Happening, a Redford Center production, featuring Director, James Redford’s personal exploration into renewable energy in the U.S. Happening will Premiere on HBO in December 2017. Tina also serves on the Creative Advisory Board for The Redford Center. 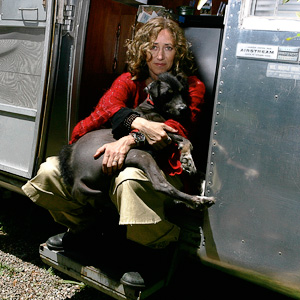 Elisa was born in Milan. She moved to Los Angeles to pursue her editing career and began working in advertising at Red Car with editor/director Larry Bridges. Shortly after, she started working exclusively for DGA winning commercial director, Joe Pytka and edited campaigns for Pepsi, Lee Jeans, Nike, Levis and others.

In 2008,Elisa edited and co-produced the feature length documentary No Subtitles Necessary: Laszlo and Vilmos, directed by James Chressanthis, which premiered at the 2008 Cannes Film Festival and was nominated for an Emmy Award. In 2011she edited a second Oliver Stone documentary, South of the Border, which premiered at the Venice Film Festival. In 2012, she was the Additional Editor on Gabriela Cowperthwite’s documentary Blackfish, which was shortlisted for the Oscars and received an ACE Eddie nomination.

Elisa co-produced and partially edited Cecilia Peck’s Brave Miss World, which was nominated for an Emmy in 2014. She cut “Rising From Ashes”, executive produced by Forest Whitaker.

In 2012 Elisa worked on James Keach’s Glen Campbell…I’ll Be Me, which opened at the Nashville Film Festival and won the Grand Jury Prize. The film has been met with critical acclaim and audience recognition, receiving nominations for an ACE Eddie Award, 2 Grammy Awards, a Satellite Award and a Critics Choice Award. 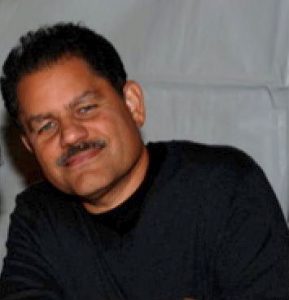 With 15 Daytime Emmy Awards as a composer and music supervisor, Dominic Messinger’s current TV credits include The Young and The Restless (CBS), Intervention (A&E), Gold Medal Families (Lifetime), Untold Stories Of The ER (TLC), and the theme music to EXPOSED With Deborah Norville (REELZ) and the web series In Bed With Joan (Joan Rivers).

Documentary scores (narrated by Harrison Ford) are: Brace For Impact: The Chesley B. Sullenberger Story and Perfecting Flight: Bob Hoover.