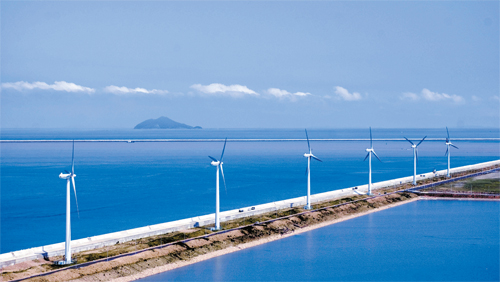 In an effort to expand the supply of renewable energy to Korean households and support its producers, the government laid out an action plan that includes the construction of a wind-generated power complex and subsidies for the purchase and use of hydrogen fuel cells.

The plan, announced by the Presidential Committee on Green Growth, hopes to raise the competitiveness of the renewable energy industry by helping it commercialize new technologies.

It calls for the government to establish a 40-megawatt wind power complex on the Saemangeum tidal flat by 2014.

The power generated from such a complex could supply roughly 13,000 households with electricity. The Saemangeum site will be used to test the commercial viability of wind turbines developed by Korean companies. A locally developed wind generator capable of producing more than 2 megawatts of electricity is nearing completion, and if cost-effective it could open a new global market to Korean companies.

The committee said it is also looking into creating a large wind farm on the ocean along the west coast. The complex would cost 400 billion won ($322.8 billion) and generate 100 megawatts of electricity. It is scheduled for completion by 2014.

The government also said it will expand the local solar energy market by 100 megawatts by 2011. That amount could power about 33,300 households.

The government plans to accomplish this through the application of the Renewable Portfolio Standards, which oblige energy suppliers to provide a certain percentage of their electricity from renewable sources. The standards will be mandatory in 2012, but companies that adopt them earlier will receive benefits.

Starting next year through 2020, the government also plans to cover 30 to 80 percent of the cost of buying and installing hydrogen fuel cells to power and heat homes.

Fuel cells use a reaction of hydrogen and oxygen to produce electricity and heat. The only waste product from the reaction is water.

The government will pay 80 percent of the cost of purchasing and installing a fuel cell in one’s home until 2012. The subsidized percentage will drop to 50 percent from 2013 to 2016, and to 30 percent in the last three years leading up to 2020.

“Starting next year we hope to receive requests from 100 to 200 households to install hydrogen fuel cells and to expand that number to 1,000 every year from 2013,” said an official at the Ministry of Knowledge Economy. Currently the cost of buying and installing a hydrogen fuel cell for domestic use is roughly 50 million won. The government estimates that will fall to 10 million won in 2015 and 5 million won by 2018.

Although the government has been trying to increase the supply of renewable energy through various projects including the building of 1 million “green homes,” renewable energy has remained rare. In 2005, it accounted for just 2.13 percent of electricity used here, rising to 2.24 percent in 2006, 2.39 percent in 2007 and 2.49 percent last year. The portion for solar, wind and fuel cell power was even smaller at 0.1 percent.